The marriage of the Grand Duke of Tuscany Ferdinand de Medici to Christine de Lorraine remained famous for the splendour of the festivities they gave rise to. From the arrival of the French princess in Florence on 30 April 1589 until the feast of St. John on 24 June, the city experienced two uninterrupted months of equestrian shows, comedies, jousts, and other masquerades whose resonance was great throughout Europe. Of all the shows represented, the musical interludes between the acts of Girolamo Bargagli’s comedy La Pellegrina remained the most important artistic event of these festivities.

The tradition of entertaining with musical interludes the spectators attending the plays  was well established in Florence: fifty years earlier, a comparable performance had been given to celebrate the marriage of Ferdinand’s father, Duke Cosme I de’ Medici. What these two series of interludes have in common is that the musical compositions have been preserved, whereas usually this occasional music, intended for a single performance, was not preserved.

In the case of the 1589 interludes, Ferdinand had wanted them printed for propaganda purposes, so that the other European princely courts could have an accurate idea of the splendour of the event and the quality of the musicians who had been involved.

We therefore have all the music conceived for the six interludes (one before each act of the comedy, plus one at the conclusion), which took no less than a year to prepare. In total, the means mobilised were gigantic: 286 costumes made by a workshop of 50 people, 76 stagehands to move the waves of the sea, bring the giant snake to life, or bring the singers down from the skies, and up to 90 people on stage for the final interlude.
As tradition dictates, the mythological themes of the interludes have nothing to do with the subject of the comedy that justifies their existence. They are shows that combine costumes, scenery, vocal and instrumental music, dance and pantomime, and that work like tableaux vivants: indeed, there is no dramatic dimension in these scenes, no dialogue in the texts, or in other words, no action takes place on stage. In this sense, they do not directly prefigure the first operas, even though all the ingredients are already in place. And among the composers solicited for the interludes in La Pellegrina, alongside the great polyphonists Cristofano Malvezzi and Luca Marenzio, were Giulio Caccini, Emilio de’ Cavalieri and Jacopo Peri, all directly involved ten years later in the invention of opera.

The musical result offers an extraordinary stylistic variety, from the first examples of baroque monodies accompanied by the theorbo, a new instrument specially designed to support the virtuoso singers Vittoria Archilei and Francesca Caccini, to the gigantic O fortunato giorno with 30 voices divided into seven choirs that forms the apotheosis of the last interlude. The last interlude ends with the famous ballet conceived by Cavalieri, whose music was reworked for half a century by many Italian composers under the name Ballo del gran duca, thus perpetuating the memory of the most splendid festivals of the Florentine Renaissance. 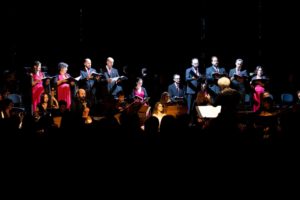 La Pellegrina at the Innsbrucker Festwochen

56 on stage: our new production has challenged the Coronavirus by restoring the splendor of the epic marriage between Ferdinando